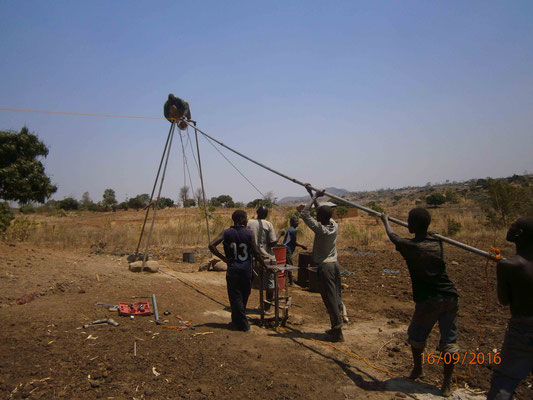 Seedsowers Trust (formerly Malawi Mission) was initially founded to provide boreholes to the rural villages in Malawi in 1994. The first borehole was provided at the village of Mitabali near Blantyre using a Vonderig manual drilling rig.

With the help of the British Government and the Malawi Water Board further manual drilling rigs were provided and some 66 boreholes were provided using these rigs.

In 1997 indigenous Malawians took over the running of the project and have since sunk over a 1000 such boreholes together with numerous sanitary programmes and was a major provider in Malawi.

A large number of women in Malawi die in childbirth due to the conditions under which they have to give birth. The high incidence of death is due in the main to inadequate facilities and not diagnosing potential problems early enough in the pregnancy. A great many of these deaths could have been avoided if the problematical pregnancies were near or in a maternity centre at the time of birth. In rural areas poor women generally give birth in dirty conditions, often in leaky huts dark huts with earth floors.

Seedsowers Trust embarked on a programme of building purpose built clinics which areequipped with delivery beds, post-natal beds, lights and other necessary furniture and equipment. The clinics comprise a delivery room, post natal ward, washroom, reception room, and outside an odourless latrine and placenta pit. The Traditional Birth Attendants (TBA's) of these clinics were given training on how to use the new facilities and to improve their delivery and care skills.

This programme was carried out under the guidance of the British Government's Safemotherhood project in Malawi and the Malawi Ministry of Health, and has been commended by them. A programme of 11 such clinics were completed at Mwanjati, Sani, Chibothera, Kasamba, Lozi, Nkhalamba, Chigamula, Tsoka, Benga, Mwansamba and Chiwaya villages.

The funding for some of these was raised by students of Exeter College and St. Margaret's School, Exeter as part of their Millennium Duke of Edinburgh Gold Award. The British Department for International Development provided funding for boreholes for three of these clinics. The programme was discontinued due to the Malawi Government's change of policy on maternity care.

The 'Agape' Orphanage at Blantyre, Malawi, is run by Fletcher Kaiya and his wife Clara. The original orphans ranged in ages from 5 to 13 years. The project is funded mainly from Fletcher and Clara's own finances, a donor in Canada and ourselves. The residents of 'Agape' are now young adults and are in the process of higher education and vacational training. Although the orphanage is Christian and teaches Christian values, orphans from other faith backgrounds have been welcomed. The orphanage is well run and managed, a peaceful and loving atmosphere, and there is always a warm welcome for visitors.

This project is supported by our Orphan Sponsorship Scheme. Contact us for further information.

Tsoka Tsoka is a village situated on the edge of Lilongwe, translated it means “woe”. Twenty years ago these villagers were living near the inner part of Lilongwe. As the city grew, the villagers were removed and put onto a new piece of land. This land is very dry, and the crop yield this year is very low, due to poor rains. Tsoka consists of 4 villages, Tsoka, Kalenga, Kumalambo and Kaingn. Population around 800 people.

Seed Sowers Trust commenced a nutritional programme at Tsoka, under the supervision of Patricia Pickering, a registered Nurse, Midwife and Nutritionalist. A group of 96 children were selected, for this programme. They were divided into 2 groups;  One group was given Glyco-bears with Lukini Phala and the second group Lukini Phala alone.

Nutritional Diet
The stable diet of the Malawians is maize meal and cassava. In Tsoka it was maize, which is dried, then the maize kernels are ground into a flour. The nutritional outer skin is often not eaten, and the inner flour is made into “nsima”, a thick bland mixture, full of carbohydrates, and no vitamins. The children are given a thinner version, made into a porridge called “Phala”. The porridge that we used is called “Likuni Phala”, it is made up of 3 parts maize, one part Soya, with added milk powder, sugar and fortified vitamins. For this village we used Likuni Phala made with sugar. A bowl of this porridge is worth 400 calories per bowl. Each child received 5kg of Likuni Phala per fortnight.

Glyco-Bears
As part of this Programme, Group 1 received Glyco-Bears, a children’s chewable vitamin and mineral dietary supplement donated from Manna Relief. These are comprised of 26 complete vitamins and Minerals. Even with a great diet that’s providing a broad spectrum of nutrients to provide all the basics for your body’s health, there is an important role for micronutrient supplements. Especially as in Tsoka, there diet is very simple.

Diseases in Tsoka
On examination children and adults of Tsoka were suffering from malaria, diarrhoea, respiratory infections, worms internal and external, eye infections, ear infection, maramus, kwashiorkor, AIDS, skin infections and anaemia. With the accompaniment of a poor diet too, the children’s immune system was under constant attack from infections. Mental alertness was affected as well, for growth and mental development, the body needs a good diet too. The project looked at nutritional, physical, mental, and medical needs of the children.